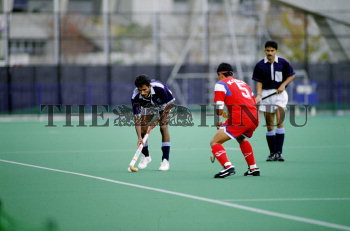 Caption : India's Mukesh Kumar takes possession of the ball as Cho Myung Jan of Korea waiting for the opportunity to take the ball during the men's hockey final between India and Korea at the Asia Cup 1993 in Hiroshima, Japan on November 14, 1993. Korea beat India by 1 goal to nil. Photo: Vino John