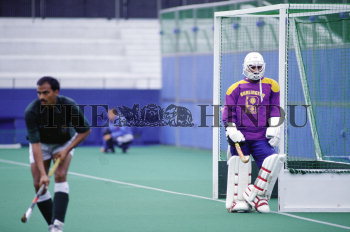 Caption : Pakistan goalkeeper Mansoor Ahmad guards the goal mouth as a defender takes a position in support during the men's hockey semifinal match against Korea at the Asia Cup 1993 in Hiroshima, Japan on November 14, 1993. Korea beat Pakistan by 4 goals to nil and entered the final. Photo: Vino John