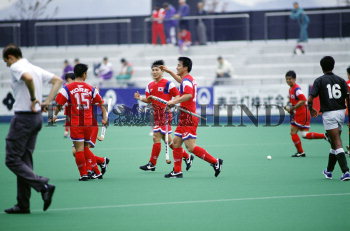 Caption : Members of the Korean team celebrate after scoring their fourth goal against Pakistan in the men's hockey semifinal match at the Asia Cup 1993 in Hiroshima, Japan on November 14, 1993. Korea beat Pakistan by 4 goals to nil and entered the final. Photo: Vino John