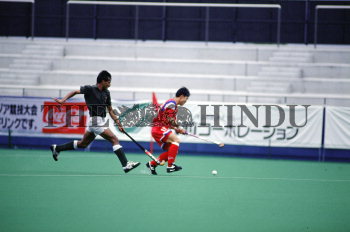 Caption : Lee Jeong Seok of Korea on his way to score the team's third goal as J. Khawar of Pakistan trying his best to stop the Korean during the men's hockey semifinals between Korea and Pakistan at the Asia Cup 1993 in Hiroshima, Japan on November 14, 1993. Korea beat Pakistan to enter the final. Photo: Vino John