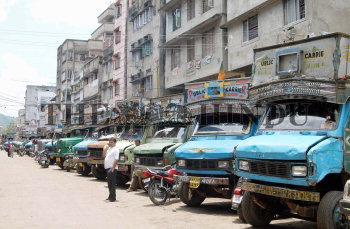 Caption : Trucks are off the road in Guwahati on July 7, 2005 during the twelve hours bandh call given by the Vishwa Hindu Parishad (VHP) in Assam. The bandh was called in many parts of India in protest against the terrorist attack on the disputed Ramjanmabhoomi SITE in Ayodhya, Uttar Pradesh, on July 5. Photo: Ritu Raj Konwar