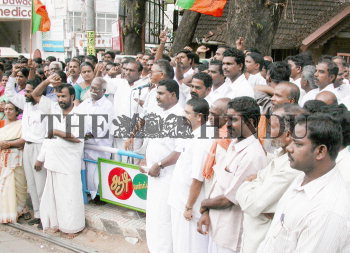 Caption : The Bharatiya Janata Party (BJP) workers led by the former Minister, Pon. Radhakrishnan, staging a demonstration in front of the Tower Post Office in Nagercoil on July 7, 2005 to protest against the hike in prices of petroleum products and to condemn the terrorist attack on the disputed Ramjanmabhoomi SITE in Ayodhya, Uttar Pradesh on July 5. Photo: A. Shaikmohideen