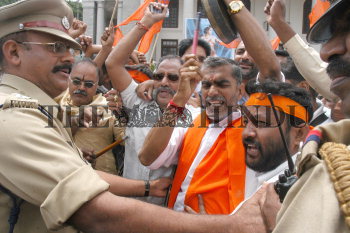 Caption : Police stopping the members of Vishwa Hindu Parishad from staging a road roko in Bangalore on July 7, 2005 during a protest organised to condemn the terrorist attack on the disputed Ramjanmabhoomi site in Ayodhya, Uttar Pradesh, on July 5 and the UPA Government's security lapse in the area. Photo: V. Sreenivasa Murthy