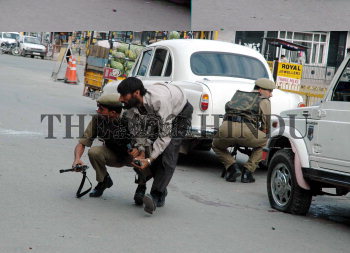 Caption : Police personnels taking position during the militants attack on the convoy of Minister of State for PHE and Irrigation, Syed Bashir at Lal Chowk in Srinagar on July 06, 2005. Militants attacked the convoy of the Minister, followed by fierce fighting in which one police personnel and four other civilians were injured. Photo: Nissar Ahmad