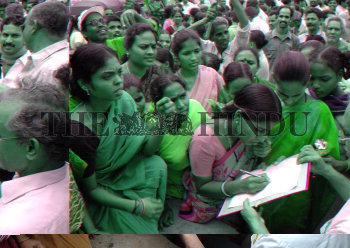 Caption : The State Secretary of CPI (M), B.V. Raghavulu, watches a woman appending her signature as the signature campaign launched by the party commenced in Visakhapatnam on July 6, 2005. CPI (M) started the signature campaign as part of its State-wide protest programme demanding the Govement to issue house site pattas and ration cards to the poor.---Photo: K.R. Deepak