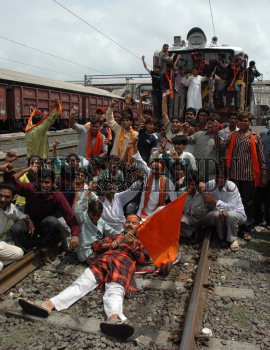 Caption : The BAJRANGDAL activists stopping the trains in Bhopal on July 06, 2005 during the statewide bandh called by the BJP to protest against Tuesday's militant attack on makeshift Ram Janmabhumi temple in Ayodhya . Photo: A. M. Faruqui