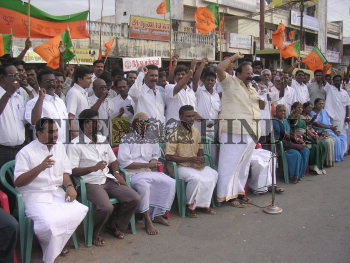 Caption : Members of the Bharathiya Janata Party and Hindu Munnani staging a demonstration in Tiruchi on July 6, 2005 condemning the terrorist attack on the disputed Ramjanmabhoomi site in Ayodhya on July 5 and the UPA Government's security lapse in the area. Photo: R.M. Rajarathinam