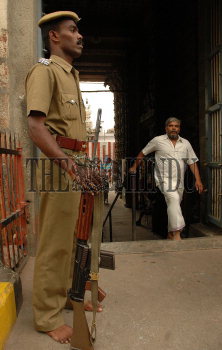 Caption : An armed police personnel guarding the South tower of Sri Meenakshi Sundareswarar Temple in Madurai on July 6, 2005. Security throughout Tamil Nadu has been beefed up following the terrorist attack on the disputed Ramjanmabhoomi SITE in Ayodhya, Uttar Pradesh on July 5, 2005. Photo: S. James