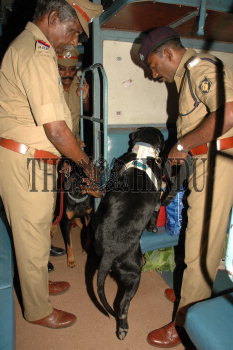 Caption : Railway Protection Force personnel checking the BAGGAGE of passengers with sniffer dogs inside an express train at the Madurai railway station on July 06, 2005. Security in the State has been beefed up following the militant-attack at the disputed site in Ayodhya on July 05, 2005. Photo: S. James