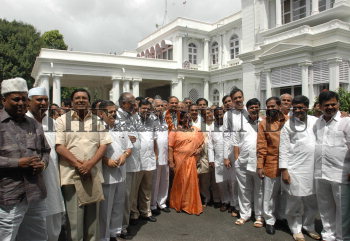 Caption : Karnataka Bharatiya Janata Party (BJP) members led by H.N. Ananth Kumar, B.S. Yediyurappa and Jagadish Shettar coming out of the Raj Bhavan in Bangalore on July 6, 2005 after meeting the Governor T.N. Chaturvedi (not in picture) to submit through him a memorandum to the President A.P.J. Abdul Kalam (not in picture). In the memorandum, the party condemned the terrorist attack on the disputed Ramjanmabhoomi site in Ayodhya on July 5 and the UPA Government's security lapse in the area. Photo: K. Murali Kumar