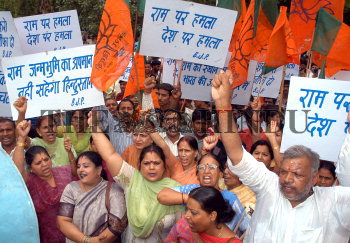 Caption : Activists of Bharatiya Janata Party raise slogans at a demonstration in New Delhi on July 06, 2005, protesting against the attack on Ram Mandir in Ayodhya by terrorists. Photo: Shanker Chakravarty