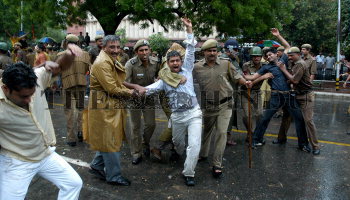 Caption : Activists of BJP, Bajrang Dal and other Hindu organisations are soaked by water cannon by Delhi police as they push through a barricade during a protest rally against the attack on Ram Mandir by terrorists, in New Delhi on July 06, 2005. Photo: Shanker Chakravarty.