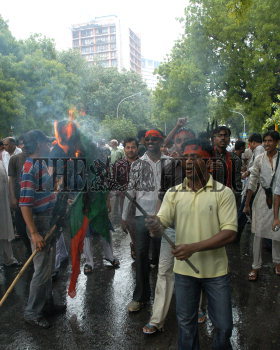 Caption : Bajrang Dal and other Hindu organisations activists burning an Pakistani flag to express thier anger over the terrorist attack in Ram Temple premises of Ayodhya, in New Delhi on July 06, 2005. Photo: Shanker Chakravarty.