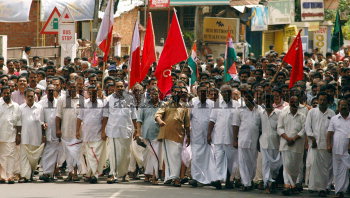 Caption : The march organised by the Sponsoring Committee of Left Trade Unions in connection with the general strike in Thiruvananthapuram on July 05, 2005. The strike was announced protesting against police action on student activists at CAP venue. Photo: S. Gopakumar