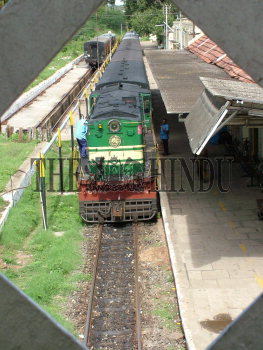 Caption : Deserted look of the Pollachi Junction in Coimbatore district. At a time when gauge conversion works are in full swing in almost every part of the State, the 160-km Pothanur-Dindigul, and Palghat-Dindigul (via Pollachi, Udumalpet and Palani) in the western parts of Tamil Nadu is still waiting to take-off. All other connecting lines with exception to the Coimbatore-Pollachi-Palani-Dindigul-Madurai section have been converted into broad gauge. This has resulted in goods services being terminated on this section, inconveniencing industries and the travelling public. It is widely felt that the tourist potential of Palani, Top Slip, Valparai, Chinnar and Munnar has not been fully realised due to poor rail connectivity of this section. Alleging the Railway Ministry of having ignored the region, Municipal Chairman A. Venkatachalam (AIADMK) said the Centre took up far less important routes for BG conversion, overlooking this line. He wanted the Ministry to take up the Pollachi-Coimbatore and Pollachi-Palghat routes to introduce direct services connecting Chennai with rest of Kerala and to Mumbai. C. Krishnan (MDMK), MP, said he had been raising the issue in the Parliament ever since he was elected member. "Even during the Railway budget' 05 budget, I took up the matter with the Minister. Survey work was completed a few years ago and the Ministry allotted Rs. 1.25 crores this year to update the project. The work will hopefully be taken up next year." Mr. Krishnan said the Rs. 250-crore project was included in the agenda and the coordination committee of Democratic Progressive Alliance had handed it over to Prime Minister Manmohan Singh. Though Pollachi had lakhs of coconut trees, the coir industry had not exploited the north Indian market due to the absence of direct train service from here, said C.M. Kamaraj, member of Coir Board. Udumalpet Traders Association president B. Balanaagamanickam said direct service would enable delivery of food grains from States. Photo:M_Balaji