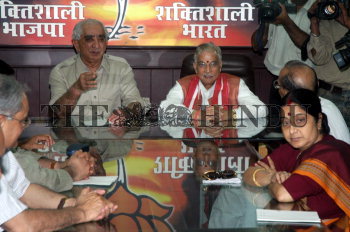 Caption : BJP leaders Jaswant Singh, Murli Manohar Joshi, Sushma Swaraj and other members at a meeting in New Delhi on July 05, 2005 following the terrorist attck in Ayodhya. Breaking the security cordon, four suspected militants gained entry into the disputed Ram Janmabhoomi campus leading to exchange of fire with security forces in which one of the attackers was killed and another captured. Photo: R.V. Moorthy