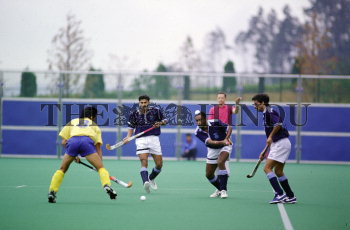 Caption : Baljit Singh Saini of India sends the ball through Malaysia's Eu Hock KHOO, watched by Indian skipper Shakeel Ahmed and Imran-ul-Haq, during the men's hockey semifinals between India and Malaysia at the Asia Cup 1993 in Hiroshima, Japan on November 14, 1993. India beat Malaysia 3-2 to enter the final. Photo: Vino John