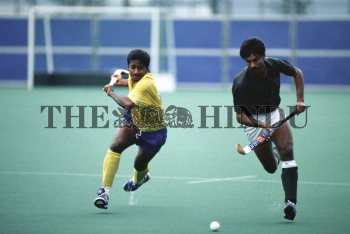 Caption : Ramu Shankar (left) of Malaysia and Mohammed Shahbaz Jr. chasing the ball during the men's hockey match between Malaysia and Pakistan in the Asia Cup 1993 in Hiroshima, Japan on November 11, 1993. Photo: Vino John