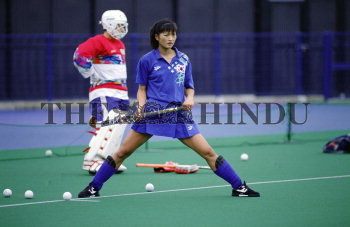 Caption : Lee Eun Kyung of Korea waits for the ball as the goalkeeper is seen in the background during a practice session before the women's hockey final between China and Korea in the Asia Cup 1993 in Hiroshima, Japan on November 14, 1993. Photo: Vino John