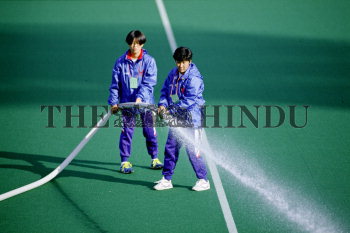 Caption : The artificial turf being watered by groundsmen during a break in between the sessions of the men's hockey match between China and Pakistan at the Asia Cup 1993 in Hiroshima, Japan on November 5, 1993. Photo: Vino John