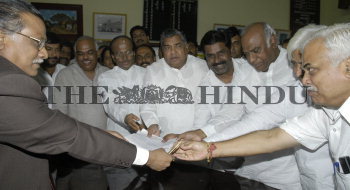 R.V.VENKATESH FILE THE NOMINATION FOR MLC

Caption : R.V. Venkatesh who was officially announced by Congress party to file the nomination for the vacant MLC seat is filing the nomination papers before the Returning Officer at Vidhana Soudha in Bangalore on July 04, 2005. Others seen are: Deshpande, H.K.Patil, Chief Minister, N. Dharam Singh, Mallikarjuna Karge and Janardhan Poojary, KPCCI president. Photo: K. Gopinathan