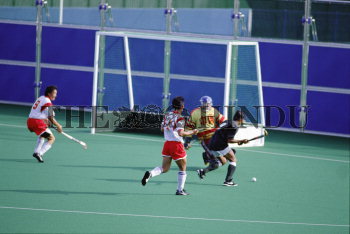 Caption : Pakistan striker Kamran Ashraf is all set to score a goal as Chinese defenders and the goalkeeper look on during the men's hockey match at the Asia Cup 1993 in Hiroshima, Japan on November 5, 1993. Photo: Vino John