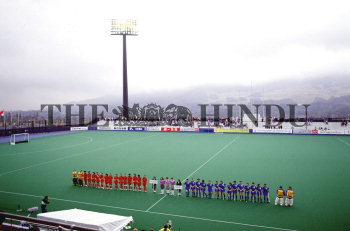 Caption : Team members of China (left) and Korea, along with the umpires, line up for a group photograph before the women's hockey final of the Asia Cup 1993 at the Hiroshima hockey stadium in Hiroshima, Japan on November 14, 1993. Korea beat China in the final. Photo: Vino John