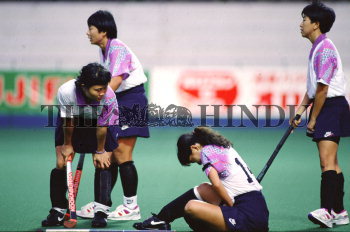 Caption : The injured Foo Siew Chin, captain of the Singapore team, writhing in pain as her teammates look on during the wome's hockey match against India at the Hiroshima hockey stadium in the Asia Cup 1993 at Hiroshima, Japan on November 8, 1993. Photo: Vino John