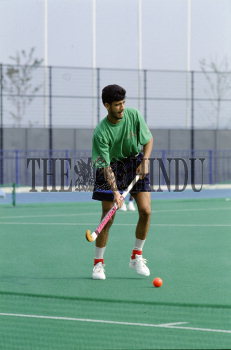 Caption : Indian hockey player Jamsher Khan about to hit the ball during a practice session at the Hiroshima hockey stadium in Japan on November 4, 1993. Indian team is here to participate in the Asia Cup hockey championship which is to be held from November 5 to 14, 1993. Photo: Vino John