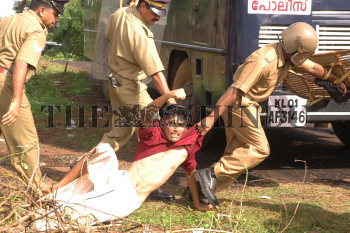 Caption : An SFI activist being dragged into police van by police as he was arrested by the latter during the SFI-DYFI BLOCKADE at the counselling centre for admission to medical courses at Kozhikode on July 02, 2005. Photo: S. Ramesh Kurup