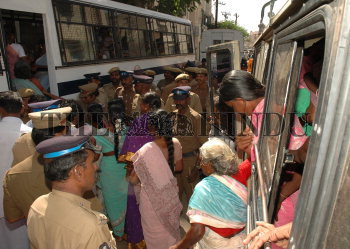 Caption : It is van to van arrest. Women cadres of the 'Ulaikkum Makkal Union' being arrested by the police even before they could alight out of their vehicle to protest against the inauguration of the Sethusamudram Ship Channel Project in Madurai on July 02, 2005. Photo: S. James