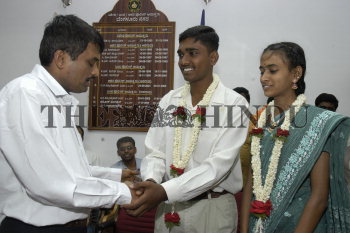 MARRIAGE OF A LOVERS PRASHANTH (GROOM) AND YOGESH

Caption : Narayana Gowda, Additional Commissioner of Police, Crime, Bangalore had a different duty to perform on July 01, 2005 at his chamber. He conducted the marriage of a pair of lovers - Prashanth (groom) and Yogeshwari (bride) as the bride's family was likely to prevent the marriage and as such the couple sought the help of the high police official in the city. Photo: K. Gopinathan