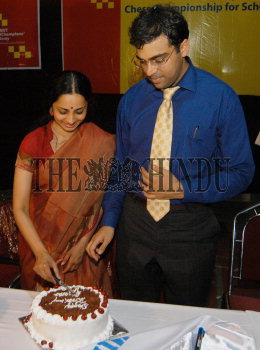 Caption : World rapid Chess Champion Vishwanathan Anand along with his wife Aruna Anand cuts the B'Day cake of his wife on the occasion of her 31st birthday plays in Guwahati city on June 30, 2005. Anand who is also NIIT's brand ambassador today launched the NIIT Mind Champion Academy's Chess championship 2005 in Guwahati for more 2700 Government and Private schools in India. Mind Champion Academy primarily focuses on spreading the game of chess in all parts of the country, nurturing young minds and identifying the best chess playing school in India.The finalists of the tournament would get to match their skills against the Grandmaster Vishy Anand. PHOTO: Ritu Raj Konwar