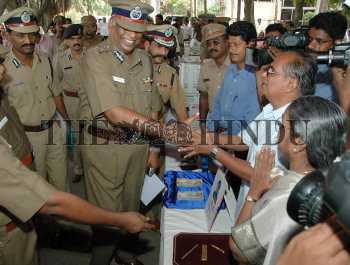 Caption : One of the victims thank A..X. Alexander, Director General of Police when he inspected the recovered stolen articles. R. Nataraj, Commissioner of Police and other police officials are also seen at Police Commissioner's office, Egmore in Chennai on June 30, 2005. Photo: S. Thanthoni