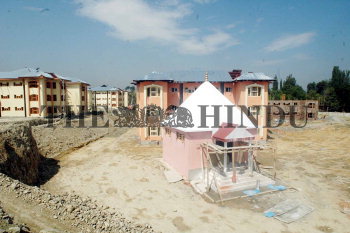 Caption : Construction workers build a Hindu temple in front of flats, for Kashmiri migrant Hindus known as Pandits, in Budgam, 15 km west of Srinagar on June 30, 2005. Authorities in Kashmir are planning the return of Kashmiri Hindus who fled the valley after a Muslim revolt broke out 16 years ago. More than 200,000 Kashmir Pandits fled Kashmir for safer places elsewhere in India when the insurgency broke out in 1989, Photo: Nissar Ahmad