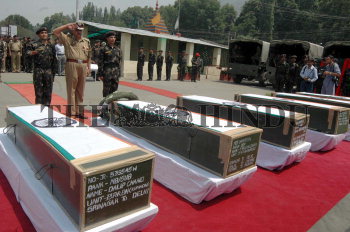 Caption : Director General of Jammu and Kashmir Police, Gopal Sharma during wreath laying ceremony of their colleagues inside an army base in Srinagar on June 26, 2005. Wreath laying ceremony was organised to pay homage to nine army personnel who were killed on Friday, 24th June in an IED blast on the outskirts of Srinagar. Photo: Nissar Ahmad