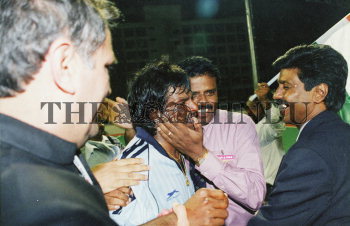 Caption : Indian captain Dhanraj Pillay is unable to control his emotions as he gets a pat from JOTHIKUMARAN, general secretary of the Indian Hockey Federation after beating Korea in the men's hockey final to win the gold medal at the Asian Games 1998 in Bangkok, Thailand on December 19, 1998. Photo: Vino John