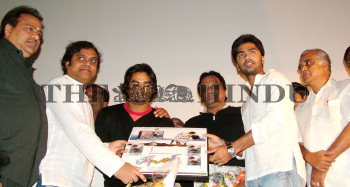 Caption : The audio of the Tamil film "Priyasakhi" being released at a function at Abirami Mega Mall in Chennai on June 24, 2005. The music director of the film, Bharadwaj (third right), releases the first copy which is being jointly received by the music director Harris Jayaraj (second left) and actor Simbu (second right). Also seen are the hero of the film, Madhavan (third left) and the proprietor of Abirami mega mall and general secretary of Tamil Nadu Theatre Owners' Association, 'Abirami' Ramanathan (ext right). Photo: M. Srinath