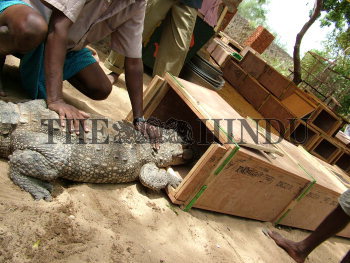 Caption : The Madras Crocodile Bank Trust is sending 40 crocodiles to Bangladesh since the marsh crocodile is almost extinct in that country. The 'Operation Pack-the-Crocs' began on June 23, 2005 morning at the Crocodile Bank here. As many as 10 handlers were on the job - catching them from the pit, tying their mouths and directing them into individual boxes. The handlers took about 10-15 minutes to complete the process of catching a crocodile and housing it in a box. Photo: M. Karunakaran