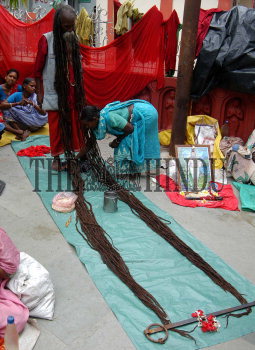 Caption : A Hindu sadhu with his 24 feet long hair at Ambubachi festival which has begun at the famous Kamakhya temple in Guwahati on June 22, 2005. Thousands of devotees and holymen from across the country assembled at the temple on the occasion of the four-day long festival. The festival is celebrated to mark the menstruation period of the goddess during which the sanctorum of the shrine remain closed to worshippers.The festival is attended by both Vaishnavites as well as Shaivaites. Vaishnavites are vegetarians while Shaivaites eat meat and indulge in smoking and drinking. Members of both the sects do not communicate with anyone during the fasting period. After the fourth day when they break their fast, the holymen as well as devotees mingle freely and celebrate by SMEARING colours on each other. They mostly dress up in red which is considered sacred. Photo: Ritu Raj Konwar