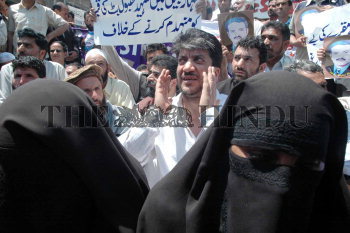 Caption : Kashmiri separatist leaders and Chairman of Democratic Freedom Party SHABIR SHAH along with other senior leaders, march along the streets of Lal Chowk in Srinagar on June 21, 2005 to lodge their protest over the reported dismantling of the grave of Maqbool Bhat, the co-founder of Pro-Independence Jammu and Kashmir Liberation Front(JKLF) at Tihar jail outside New Delhi. Bhat was hanged on February 11, 1984 in Tihar Jail. Photo: Nissar AHMAD