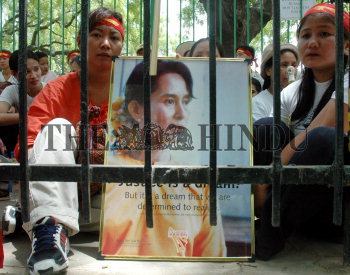 Caption : Burmese protesting at Jantar Mantar, New Delhi, demanding the release of the Burmese opposition leader Aung San Suu Kyi by the Burmese Junta on the eve of her 60th birthday, on June 18, 2006. Photo: Kamal Narang