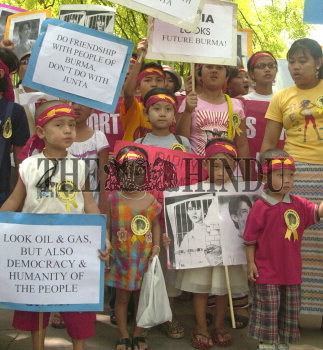 Caption : Children of the members of the Burmese pro-democracy groups in India participating in a demonstration at Jantar Mantar in New Delhi demanding the release of the Burmese leader and Nobel Laureate, Aung San Suu Kyi, on the eve of her 60th birthday on June 18, 2005. Aung San Suu Kyi's supporters plan protests around the world demonstrating outside Myanmar's Embassies in a dozen countries to demand her release from two years' house arrest. From May 30, 2003, Ms. Suu Kyi, has been 'confined' to her residence in Yangon, Myanmar. Photo: Shiv Kumar Pushpakar