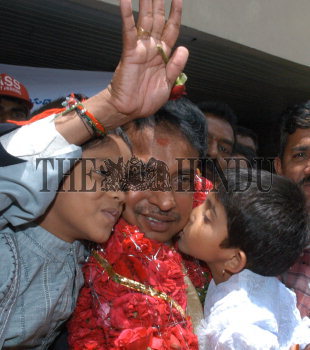 Caption : The Police Sub-Inspector of Karnataka, P.N. Ganesh, the first South Indian to conquer the Mount Everest, being greeted by his daughter and son during his arrival at Bangalore Airport on June 16, 2005. Mr. Ganesh, the only member of the International Expedition II from Karnataka reached the summit at noon (Chinese Time) on June 3 after climbing 8,848 meters. He spent about eight minutes there. Mr. Ganesh's expedition to Mount Everest was supported by the State Government and the privately managed Pinnacle Foundation of Bangalore. This was the second attempt for the police officer; he missed climbing the summit by 48 meters in 1995. He carried with him the national flag, the State flag and the police flag. Photo: V. Sreenivasa Murthy