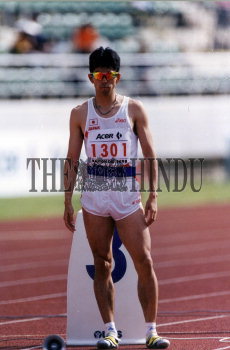 Caption : Japan's Koji Ito looks on before the men's 200 metres event at the Asian Games 1998 at Bangkok, Thailand on December 18, 1998. He won the gold medal in the event with a new Games Record and also won the men's 100 metres event gold medal. Photo: V. Sudershan