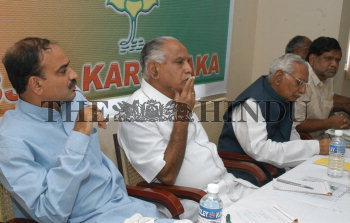 Caption : From left: The Bharatiya Janata Party's (BJP) all-India general secretary, H.N. Ananth Kumar, the leader of the Opposition in the Karnataka Assembly, B.S. Yediyurappa, the Party in charge of Karnataka, Ved Prakash Goel and the Party's State unit president, JAGADISH SHETTAR, at the BJP's Karnataka office-bearers' meeting in Bangalore on June 15, 2005. The State office-bearers who discussed the Party's defeat in the June 2 byelections in Shimoga (Lok Sabha) and Chamarajpet (Assembly) have taken the view that the alleged largescale flow of money and liquor and electoral irregularities influenced the outcome. Photo: V. Sreenivasa Murthy