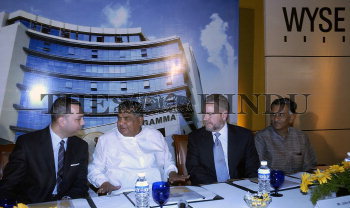 Caption : The Karnataka Chief Minister, N. Dharam Singh (second left), having a word with the president of the Wyse Technology Software (WTS) Development, India, Nav Bhullar (ext left), as the Chief Executive Officer of the US-based networking firm, Wyse Technology Software (WTS), John Kish and the Karnataka Minister for Science and Technology, Basavaraj Horatti (ext right), look on during the inauguration of the India corporate office and software development centre of WTS in Bangalore on June 15, 2005. Photo: K. Bhagya Prakash