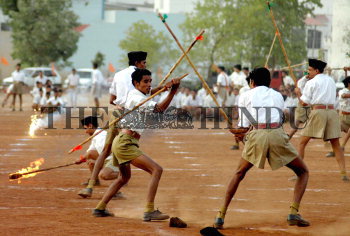 Caption : RSS volunteers performing mock self defence drills during the concluding session of the Sangh Shiksha Varg, a 20-day training camp for the volunteers of the Central India unit of RSS, at Sharda Vihar in Bhopal. Photo: A.M. Faruqui, 13-06-2005