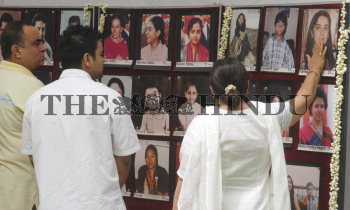 Caption : Relatives looking at the photographs of the victims of 'Uphaar cinema hall fire tragedy' after holding a havan and shanti path at Smriti Upavan opposite the cinema hall at Green Park Extension during the eighth anniversary of the tragedy, in New Delhi on June 13, 2005. As many as 59 people were killed and several others injured in the tragedy following the fire which had started from the transformer installed in the basement of the Uphaar cinema hall during the screening of the Hindi film ''Border'' on June 13, 1997. Photo: Rajeev Bhatt