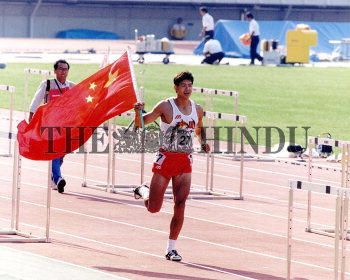 Caption : Li Tong of China, who won the men's 110 metres hurdles gold medal with a new Games Record, celebrates with his national flag during the victory lap at the Asian Games 1994 in Hiroshima, Japan on October 15, 1994. Photo: V.V. Krishnan